If you find yourself in the uncomfortable situation of needing a jump start, below is a set of "how-to" instructions. Even though your car is a BMW or MINI, it can be jumped if needed by someone who knows what they are doing. It does take a little safety practice and awareness to make sure things are done right, though, and that's what we are going to talk about! 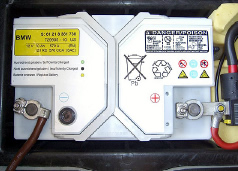 This next part may seem overly simple to some readers, but I've seen enough toasted remains of ECU's and just want to make sure we're all on the same page. Red (+) is the positive side of the battery. It normally (but not always) has a red wire connected to it.

The (-) sign means the ground or negative side of the battery. It will generally be connected to a black or sometimes brown wire.

WARNING: If you attempt to jump start and accidently mix up the leads...it's very dangerous to you and the car, so be careful! 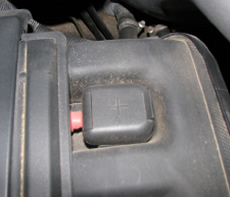 JUMP START FUNDAMENTALS Your car will typically have a "jump" point under the hood. The location and look of the jump point varies from model to model but will share similar characteristics.

Traditionally, the Positive (+) jump point will be under a small flip-lid with a Red (+) on it. The Negative (-) point is normally a large shiny nut on the strut tower or other body ground location. Jump starting from under the hood is normally the better option versus trying to jump start from the trunk. 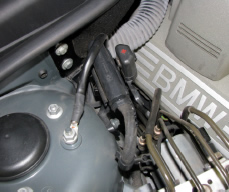 SEQUENCE Now that you have found the (+) and the (-) jump points, it is time to talk sequence. Turn the good vehicle off and make sure all headlights, blinkers, car radios and A/C's are off, radar detectors are unplugged, cell phones unplugged, everything off.

Start the good car's engine, and make sure the headlights are off, to allow the maximum amount of power to get to the dead battery. Let the good car's engine run a minute or so before attempting to start the dead car. Sometimes you get lucky and the dead battery will jump start right away, sometimes it takes a few minutes. If your dead car's interior dome light comes on, it's a great sign that you've connected the cables right. Now shut all doors and dome lights and try to start the car. If it sounds like it's trying to crank but won't turn over completely, give it a few more minutes and rev the engine moderately on the good car. After a few minutes, you should be able to start your car!

Now that your dead car has been successfully jump started, you can remove the cables in the reverse order that you connected them being careful not to let the battery cable clamps from touching each other:


After your revived car has been running a few minutes, turn off the engine and see if it will restart on its own, no cables attached.